UPDATE: The clubhouse is now open for business!! Here are the rules because of COVID-19 service is curbside ONLY ,we are open 9 a.m. to 7 p.m daily anyone playing must be a member or have paid a green fee. Payments accepted are cash,debit,credit or e-transfer to srfgolfcourse@hotmail.ca We can be reached @ 705-338-2408 if you have any questions .Hope to see you soon !
​​​
Follow us on Facebook! 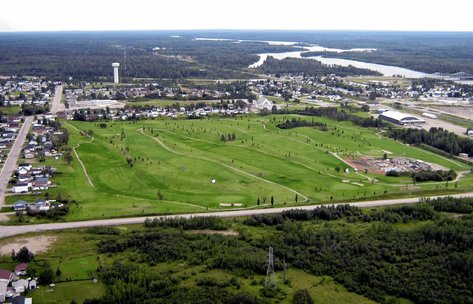 History
Since its inception, the town of Smooth Rock Falls has struggled mightily to construct and maintain a community golf course.The first in a series of attempts took place between 1945-46 by Adolph, Ernest (Otto)  Wagner
and company. Located on the west side of the river, this modest three hole  course was christened the Silver Links Golf Course. Unfortunately, due to a lack  of interest and funds it was eventually abandonned until the early 1960s when  a dedicated group of golfers revamped the old course. Thanks to the work of Gilbert Lacroix, Marc Rioux, Alex Roberts, and Tommy Moore new life was breathed  into it, but their victory was to be short lived as it once again ran out of money and was abandoned for good. Renewed interest during the year of  1969 sparked a massive undertaking headed by Norm Menard and company  to build an  entirely new course north of the Abitibi pulp and paper mill. The proposed course was to be built on approximately 35 acres of land that had been formerly owned by Henri Touchette and the Lavoie family. It was opened in 1970. Once again it was not meant to be and after only a few  years of operation, it was closed permanently in the early 1970's. Undaunted, in 1988 a feasibility committee was formed with the aim of examining the possibility of building a new golf course. It was to be located on  the east side of the Smooth Rock Falls arena on approximately 45 acres of land which was owned by Tembec Inc.The original designer of the course was Gord Onotsky (engineer at Malette Kraft  Pulp and Paper). In 1989, David L. Moote and associates were hired to prepare the official drawings and specifications for the course. The original construction budget was $900,000. After several years of lobbying the government for grants and funding, the project was once again shelved due to lack of funds. In 1995, the documentation from the 1989 committee was revisited by Roger Therrien, Moe and Armand Cousineau. Because of the growing popularity of the sport and the overwhelming amount of golfers travelling out of town to golf, they decided that the time was right to finally build the new course.Utilizing ,fundraising groups, volunteers, local contractors, and members of the community; they managed to raise $78,000, a far cry from the original budget. Faced with adversity and criticism, the team pushed on with one goal in mind "build the golf course".Thanks to their gallant effort and the continued support of the community and volunteers, the construction was started in 1995 and was completed in the fall of 1996. It was officially opened on June 14th 1997 and was rechristined the Smooth Rock Falls Golf Course and remains in operation to this very day.

The building of this course would not have been possible without the help of the following:
Cloutier Machine Shop (Hubert Cloutier) C-tech (Mike Chartier), Tembec, O.J. Pipeline, Phoenix, Town of Smooth Rock Falls, Gord Onotsky, Bernier equipment, Tessier signs, all the share holders who donated money to raise the initial capital  and to the volunteers who spent 1000,s of hours of free labour. Thank you.
Dedicated in memory of Gord Onotsky who never got to play his golf course because he passed away before it was finished.
Powered by